In June, we visited an old friend from early 80’s Brixton days at his house at Waikawa Bay in the Marlborough Sounds – a world away from South London to say the least!  A perfect mid-winter afternoon idling on the deck with Moa ale and the view, with the old pa site on the point and the various ferries and boats going by. 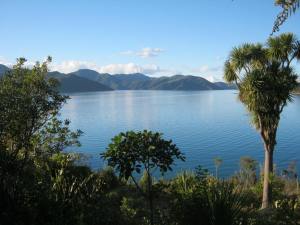 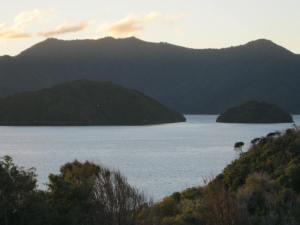 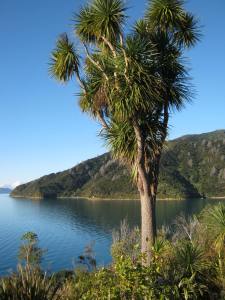 Gifted to the owner of TereTere in 2014. I drew this in ink 30 years ago for the invitation card for their wedding here, that one from the lawn below with the old whaler’s pot and the same ti/cabbage tree. The composition is still a challenge with its 180 degrees of sky and hills, the long stretch of water and wide foreground – the first 3 photos are the core but still only 1/2 of the sweep of it. I’ve seen various attempts to paint it all that look like the Uzbekistan flag, 3 horizontal sections of sky, hills and sea that run off the page on each side – doesn’t usually work, for me at least.

Initially I tried it as a sunset in red-yellow plus blue/green acrylics on coarse hessian – it’s OKish but yeah, nah… then as a tripytch in oils on loose canvas, 900mm x 600mm. The left-side sea level should have been lower as in the attached sketch – but otherwise its largely what I was after, particularly the limited palette (not sure that the orange /pink in the sky comes through in the photo); curving the walls (at the risk of being a bit early-70s!); and the red island crossing the 4th wall as a focal point. I may do a variation – first, what do you think? What works or doesn’t; what might?

My 50th post! alistairsart is now on Facebook. Check it out, and maybe give it a cheeky ‘like’ to stay up to date with the latest work –
facebook.com/alistairsart

View all posts by Alistair McDonald